(Note: I just spent another weekend going through this all over again. It's a good thing I wrote this blog before that, because I've lost all sense of humor since then.)

There came a certain point the other day, when I dropped to the ground in exhaustion and told my wife, "I don't think I can do this."

Get your mind out of the gutter. Or maybe not, since I'm talking about routing out a sewer line.

You may call it a sewer snake, or a router, or go with the trademarked Roto Rooter, but any way you look at it, it's a crap job. Despite my well-known lack of mechanical ability, I've used routers numerous times, back when roots were growing in my sewer. (By the way, the stuff you flush down that's called "root killer" is really, I suspect, root fertilizer.) But several years ago a true professional came in, put a giant trench in my back yard, and replaced the old ceramic sewer line with brand new, professional grade plastic. I've had no problem since.

And it always happens on a weekend, in order to maximize your troubles. Emily and I were preparing for an author appearance, and I headed to the basement for a folding table. There it was: two pools of water over the lowermost drains.

Indoor swimming pools are only fun if you can control what kind of water goes with them.

Ah, but now the good news: While replacing the line, the pro guy put in something called a cleanout, and its purpose is to give you a place to put in the snake/router/out-of-control-metal-tentacle-monster if you need to clear a blockage.

The router I rented weighed six thousand pounds, but it was way easier using it outside than trying to work it through a drain in the basement. I put fifty feet of writhing, hand-smashing sewer snake into the line. It did absolutely nothing.

Which is pretty much standard with my home maintenance jobs.

Have you ever heard a car scream? It's not pretty.

But the place I rented it from (Doc's Hardware, downtown Albion), traded me a smaller unit for no extra charge. That one, with maybe a bit of effort, did go into the basement drain. After about twenty-five feet of pretending I was my house's doctor giving it a colonoscopy (now it knows how I feel), the router bit came out with a substantial amount of yuck clinging to it.

It sounds so much easier than it was. I'm not just talking about the pushing and pulling, and the invention of new curse words. To get the router bit in I had to lay on the floor, stick my hand into the drain, and physically force it around a bend in the pipe. Yeah. You know what was in that drain? Yes. Yes it was.

This is why, during our after action review, Emily poured two gallons of peroxide and then three gallons of alcohol on my hand. You see, so much skin had been skinned (thus the term) that, had it been broken (as at one point I thought it had), the doctors could have examined my bones without doing x-rays. Emily was, quite rightly, concerned about infection. (I mean, we do know where it's been.) She was also rightly concerned about the neighbors calling 911 after all the screaming, but I suppose they're used to me by now.

I felt like I was victim #3 on an episode of Game of Thrones.

(Note: We need to buy more peroxide and alcohol, and maybe drinking alcohol, too.)

I don't remember at what point I told Emily that I wasn't sure I could do this. It was fairly early in the process, and I think it has a lot to do with the fact that I'm in my fifties, and last time I routed a sewer line I was in my forties. I don't feel any different--except for when I try something like this.

I'm going to call that a win. 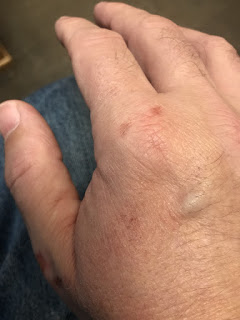 It really wasn't that bad, see? 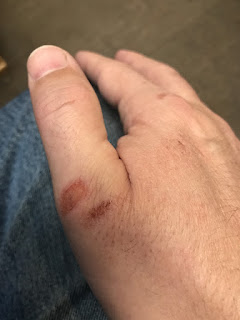