It's hard for any of us today to fully understand just how much of an underdog the American military was in 1942. In the Pacific the Japanese had a bigger navy, more experience, and often better arms. We had no reason to believe they didn't plan to invade Hawaii, then go on to attack West Coast cities. As nations played a dangerous game of chess across the vast ocean, a tiny, two and a half square mile atoll in the middle of nowhere was so important that Japanese destroyers shelled it the same day Pearl Harbor was attacked: the two islands of Midway.

(And by the way, the first U.S. Marine to earn the Congressional Medal of Honor during WWII earned it that day, at Midway.)

How can one movie possibly show how critical of a time that was, for both sides?

It turns out: pretty darned well. 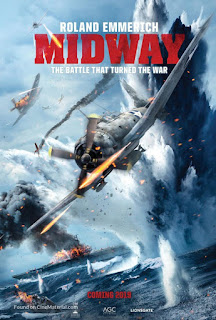 I was concerned when I found out Midway actually starts with the Pearl Harbor attack. In 1976 Hollywood pulled together every famous actor they could find to tell just the story of Midway itself, the one battle, and it took them 132 minutes to do it. (Granted, they had to jam in a love story along the way.) This new movie was working in the Pearl Harbor attack, the Doolittle Raid, and other battles that happened along the way! How could they manage that?

Pretty darned well. And maybe in a way better: In the more than forty years since the first movie, many of us need a reminder of the chain of events leading up to the battle.

This Midway also brings in several celebrities, all of them playing real historical figures, from admirals to the poor back seat guy in the dive bombers, trying to drive away fighters without shooting off their own plane's tail. The movie pulls everything together by concentrating on a few characters who get to be involved in just about everything (and some of them really were). There are no star turns here: The impressive performances by people like Woody Harrelson, Dennis Quaid, and even Mandy Moore are all the more impressive because they manage to turn themselves into their characters--not stars playing their characters. 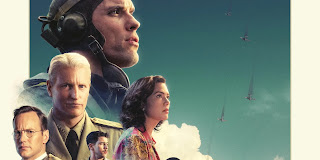 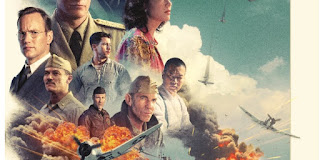 Similarly, there's the concern that giant explosions and flashy special effects might overwhelm the actual story. After all, it was directed by Roland Emmerich, who seems to have destroyed the world in every way possible. And there certainly were plenty of effects, but this is a war story, and they served the story instead of the other way around. I suspect some people will find them overwhelming; I also suspect that in some scenes they were meant to be. But it works: sometimes I became genuinely concerned about the characters even though I already knew what was going to happen.

Midway is overall historically accurate. But, to fit half a year's worth of war into 138 minutes, shortcuts are taken from time to time, and once or twice I found them jarring. For instance, at one point we see a navy commander make a critical decision about attacking the enemy, and in the next scene we see a carrier burning--you have to pay attention to understand they were connected.

But for the most part they do a good job--an amazing job, really--of guiding us through the strikes and counter strikes that led to this turning point in the Pacific War.

Entertainment Value:  4 out of 4 M&Ms. This was something of a throwback to the war movies of an earlier time, where you can actually enjoy the movie and understand the stakes without being buried in graphic violence and Important Messages. Not that there aren't messages to be had.

Oscar Potential: 2 out of 4 M&Ms. Everyone did a great job overall, but this doesn't seem to be the kind of movie Academy voters care about. I did sometimes wish I could insert John Williams' score from the first Midway into this one.