Your Own Anti-Anxiety Advocate

I was rather anxious about something the other day, and when I mentioned it to my wife, she told me I was suffering from anxiety.

Well, yeah. And poor people are suffering from a lack of money.

What she meant was anxiety disorder, a disorder that can make people anxious. Several years ago I was diagnosed with Seasonal Affected Disorder,  a disorder that affected me in the winter season. See, medical stuff isn't really all that complicated, once you diagnose the names.

Emotional problems have a stigma--the idea that maybe it's not a medical thing, but somehow  your fault for being weak, or complaining too much, or maybe watching too much "Housewives of" programming. Okay, maybe that last is a personal fault. But if you have a real problem, you should be able to talk it out.

One thing that could make anxiety disorder worse is getting anxious about it. So best to just tackle the issue, find out if you have it, and deal. I turned, as most people do in these important moments, to the internet.

What could have caused this with me? Well, as of this month I've earned full retirement from my 911 dispatching career, but I wanted to make enough money writing to supplement my income after that. In other words, I wanted to retire so I could write full time, but I'm not making enough money writing to retire. As that time neared, I became more and more fixated on it. Thus, anxiety. 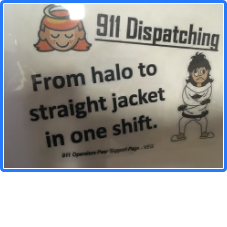 Second on the list was restlessness and difficulty concentrating. Here on the written page, where I can edit to my heart's content before hitting "publish", I seem fairly put-together. In reality, I kept getting distracted by puppy videos, chocolate snacks, and winter storm warnings.

Third, problems with decision making. I don't think I'm indecisive. Well. Sometimes, maybe. Or maybe not. I'm not really sure. Maybe you should ask my wife.

Next: Worrying about anxiety or, in a nutshell, worrying about worrying. People who know they're suffering from anxiety often get anxious about it, which is--let's face it--what led me to this point to begin with. It's a vicious cycle, like weekly lawn mowing, or Congress.

Five, mental stress can wreck you physically. Fatigue, irritability, headaches, all the things I thought came from taking 911 calls for a living, may actually be caused by the anxiety I experience after taking 911 calls for a living. It's a fine line. Also on the list are being easily startled, frequent aches and pains, and throwing things at the TV whenever adds for "The Bachelor" come on.

Next: Sweating, which is followed by shortness of breath and palpitations.

Ah--those I don't have! I'm cured! I never had a problem to begin with! Put that in your cigar and smoke it, Sigmund.

Next is insomnia. Got you there, too. I usually have no problems at all falling asleep, especially after taking my bedtime meds, which cause drowsiness and I think I just figured out why they're to be taken at bedtime. Sure, I sometimes wake up just a few hours later and have trouble getting to sleep again, and sure, only about half of people with general anxiety disorder report sleep problems, but oh, shut up.

Irrational fears. I'm not sure about this one. Define irrational. Do I fear machines taking over the world? Yes, I do, but the other day I asked Siri for directions and she said "don't worry, we'll find you" ... so I really don't think it's so irrational.

I also have a fear that no one will ever read my books, because so many people have stopped reading that there are more writers than readers, and the writers don't have time to read. I'm not so sure that's irrational, either.

There are similar symptoms, such as fatigue, irritability, and feelings of impending doom, all of which I have, but in all fairness this country is locked in a 24/7 election cycle--even though we just keep electing the same morons back into office, anyway. Is there anyone who's not irritable?

I found the list of treatments for anxiety interesting. Sunlight? All for it. Warm baths? An excellent idea. So is lowing caffeine intake, and I'll get back to you as soon as I retire from my third shift job. Then there's exercise, but no treatment plan is perfect.

Dietary modifications are important, and also easy: Just stop eating everything you like, and start eating everything you don't. Increase your intake of something called superfoods, which have lots of vitamins, minerals, and fiber. By sticking strictly to superfoods you're bound to lose weight, because you'll no longer be interesting in your meals. Anybody want a nice avocado? Me neither.

Essential oils are also supposed to help, specifically lavender oil. The way I see it, what's the harm of trying? It smells nice. I tried the same thing with chocolate aroma therapy, but the scent goes away quickly once you eat those candles.

Finally we have tea, which I thought was a great idea. "Earl Grey," I told my wife. "Hot."

She patted me on the shoulder and said, "You just have fun making that", which I must say increased my anxiety. But that wouldn't help anyway, because apparently the stress-fighting tea of choice is Chamomile. Have you tried it? Doesn't taste like tea. Maybe I can combine it with Earl Grey.

In the end it's modern life that causes much of our anxiety. But it's also modern life that keeps us so happily modern, so I'll avoid the Amish solution. As for the rest, I'll keep you updated, now that I've become an anti-anxiety avocado advocate.

(And yes, I went to the doctor about it. I'm now stressed about being on another med. For stress.)

Meanwhile, as I go down the line and check yes on almost all the boxes, there's something calming just having a name to put on the problem. Yes, blaming all the stupid people in the world has a certain therapeutic effect, but the difference is you can treat anxiety disorder; stupid people aren't going anywhere.