Hopefully the final draft's not too far Off the Mark

I finally finished the Still Slightly Off the Mark manuscript!

By which I mean it's ready for Emily to review, find all the mistakes, and send it back to me for rewrites.

But that's the way we do things in the Hunter household. With these other writing projects we're working on, my final polishing of this was when I could get to it, usually during breaks. That's why there would be food on the pages, if there were pages. (Not to worry, I covered the keyboard.)

It clocks in at just under 60,000 words in nineteen chapters, and has about twenty illustrations, which is a fancy word meaning "pictures". An illustrated manuscript--it's like I dragged myself into the 21st Century, or something.

It looks like we'll be able to get it out before Christmas, despite the previously mentioned other projects we're working on. Until then the working full title is either:

Still Slightly Off the Mark

A Celebration of Silliness

Still Slightly Off the Mark:

Why I Hate Cats, and Other Lies

What do you think? If neither of those work I was thinking of titling it Harry Potter and the Star Wars Avengers, but Emily thinks that might be just a wee bit misleading. 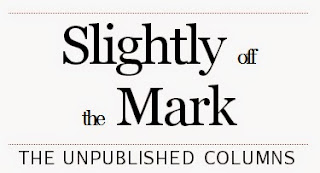