Has it really been ten years since Zombieland came out?

When we last saw our four friends, they'd just escaped certain death at an amusement park on the West Coast. Well, the great thing about the zombie apocalypse is that zombies don't drive, so a cross-county road trip would have way less traffic. 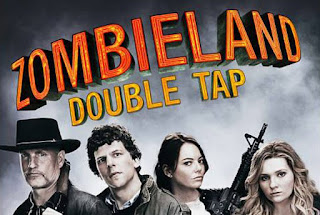 Our friends Tallahassee (Woody Harrelson), Columbus (Jesse Eisenberg, also our narrator), Whichita (Emma Stone), and Little Rock (Abigail Breslin) have taken advantage of that, and ended up in a new, secure home across the country: The White House.

But all is not well with our little family. Little Rock was eleven when the apocalypse hit, and is frustrated at still being treated like a kid, and by the lack of people her own age. Tallahassee is aching to be on the road again. And while Columbus and Wichita seem a happy couple, she freaks out when he presents her with an engagement ring: specifically, the Hope Diamond. (Half the fun of the early scenes involve the gang hanging out in Washington, mostly at 1600 Pennsylvania Avenue.)

Soon the group is split up and on the road again, avoiding new and more dangerous zombies and headed (by way of Graceland) toward a hippie paradise called Babylon. There anyone who enters is made to melt down their weapons, before they enter "paradise". You know that won't end well, and sure enough, they soon have to defend their domain from an army of the undead.

Zombieland: Double Tap is exactly what we need from a comedy these days: Humor, unencumbered by political correctness. We're treated with new characters along the way, including laid back stoner pacifist Berkeley (Avan Jogia), and ditzy Madison (Zoey Deutch, who I nominate for funniest dumb blonde ever). They're both people who by rights shouldn't have survived this long, but we get to be treated to our main characters' reaction to them. 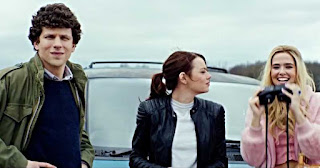 We also get Rosario Dawson as the kick-ass proprietor of an Elvis Presley themed motel, and a strangely familiar duo (Luke Wilson and Thomas Middleditch), as well as a few unexpected appearances that are loads of fun.

In fact, maybe that's what Zombieland: Double Tap should be compared to: Buckets of bloody fun. And guts. There's a lot of shooting and zombie killing, plenty of action, and most of it is oh, so funny, in a gross sort of way. You can skip the end credits scene if you want to, but please, please stay for the mid-credits scene. 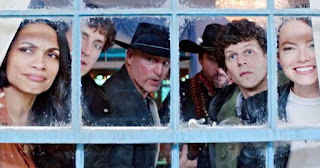 Entertainment Value:  4 out of 4 M&Ms. The good brown ones.