Books In the Rain, Or: What Could Possibly Go Wrong?

One of an author's responsibilities these days is to help promote and sell his work. This is assuming they actually do want to sell their work--many writers still write just for the joy of writing. Personally, I'd like to have my joy and sell it, too.

One way of promoting is author appearances, and/or book signings. With the exception of last year, I've done at least 2-4 every year since my first novel was published in 2011--one time I was involved in two group author appearances on the same day. Not only that, I've done them in numerous places: Stores, art galleries, libraries, fairs, my daughter's garage sale, and, yes, a fish fry.

Some were more successful than others. You'd think I'd make few sales at a library, what with them having so many books for free. But, maybe because that's where book people go, our appearances there have done pretty well.

So, even though like many writers I get social anxiety, I've dived into many unusual places in my attempts to spread the word that, yes, I write books. If you think about it, the most unusual is whenever we moved outside for a book signing. My very first appearance was on the Noble County Courthouse square, during what they call a First Friday event. 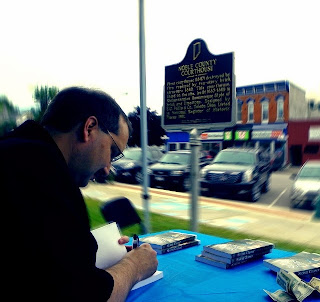 But it doesn't make sense to go outside for a book signing, does it? I mean, it's really playing the odds, especially during a Midwest summer: You spit in Mother Nature's face, she's likely to spit back at you, and by spit I mean torrential rain and page-tearing winds.

So, after some consideration, I decided not to do outdoor book signings anymore. Indoor author appearances, fine--all for 'em. But going outside just seemed unnatural somehow, like fixing your toaster in the bathtub. Every tried that? Don't try that.

Then I heard that my sister-in-law was looking to restart her fair booth, which she used to sell  homemade jewelry, and the idea presented itself: Suppose we supported each other by sharing a booth?

Yes, before you ask, it was my idea.

And that's how I ended up with my next book signing being, yes, outdoors. The details are here:

But the short story (see what I did, there?) is that we'll be at the Avilla Freedom Festival on June 20, 21, and 22, although I'll only be able to be there myself for part of the time. The way I see it, I'll happily follow my brother and sister-in-law wherever they go, because we can support each other's efforts and have a little family time.

Even if it's outside.

So my conclusion, in the end, is that sometimes it's good to take a few risks and put yourself out there--literally--as an author. And hey--nobody ever died from a little inclement weather.

Besides, those plastic totes will hold a lot of books, and they're waterproof.