I'm the last person who can be called on to write a fair review of a movie with the word "Godzilla" in the title.

The Godzilla movies were my third childhood fandom (after the Oz books and the original "Star Trek"). One of the earliest movies I remember going to see at the theater was "Destroy all Monsters". (It must have been a re-release, since the original came out when I was only five.) On TV, the best Saturday nights were when a Godzilla movie was part of the late-night Double Creature Feature.

So let's face it: I'm a Godzilla fanboy. 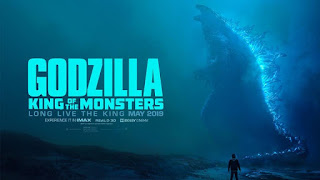 In this sequel to 2014's Godzilla we again encounter Monarch, a mysterious secret group that, since the fight involving Godzilla five years before, has expanded into a SHIELD-like international agency, complete with giant aircraft-carrying super-planes. Although Godzilla itself has disappeared, they're monitoring numerous slumbering beasts of similar size--beasts that are soon awakened by a terrorist cell bent on protecting the Earth from ... other humans. Thirty story monsters are, it seems, very eco-friendly, not to mention they'll cut down on the overpopulation problem.

To me their plot was a little sketchy on both logic and outcome. Still, it results in exactly what we paid to see: Godzilla comes out of hiding to deal with with the situation.

As with "Destroy All Monsters", Godzilla shares the screen with a whole crowd of skyscraper-sized monsters, including Mothra, Rodan, and the three -headed King Ghidorah, which here functions as the super-villain of the piece. If you're at all a Japanese monster movie fan, just seeing those names together is cheer-inducing. The movie makers recognize this, and unlike the previous film, we get plenty of monster-on-monster action ... um, in a totally non-sexual kind of way, mind you.

Still, the human cast gets plenty to do, even if a large part of it is explaining and dodging. Kyle Chandler and Vera Farmiga do well as a divorced couple whose expertise is needed in the crisis, and I especially liked Millie Bobby Brown in her first movie as their young daughter, who takes matters into her own hands more than once. Otherwise the cast is fine, especially Ken Watanabe, Ziyi Zhang, and Bradley Whitford. Of course, not everyone will make it out alive, monster or human.

The effects? They done good. I almost miss the fun of guys in rubber suits and obvious models, but these days people crave something that looks real, and they get it. For me the most shiver-inducing moment was a Godzilla appearance accompanied by Bear McCreary's reworking of the original Godzilla music ... somebody needs to buy me that score for my birthday.

Entertainment value: 3 3/4 out of 4 M&Ms. I had to subtract some, because the villain's plot was just a bit ... questionable. But I didn't go for the plot, and I'll bet I'm not alone in that.

Oscar Potential: 2 out of 4 M&Ms. Sure, it should get some Oscar attention for things like effects and music ... but it won't. 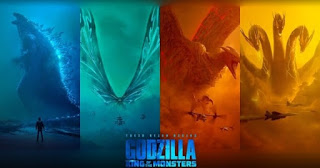