I read once that the average 911 dispatcher works in the field for about seven years before calling it quits. My (now former) boss worked in the field for 35 years. He's one of the few who actually retired, rather than moving on to a different job. 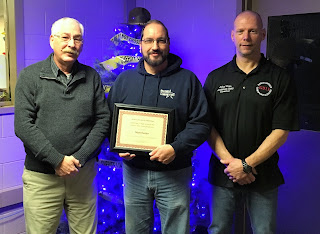 That's Mitch Fiandt on the left in this picture, with me in the middle and my immediate boss, John Urso, on the right. (The photo is of me getting recognition for 25 years of service, which makes me almost as nuts as Mitch is.)

Rather than repeat all the facts and figures, here's an article about his retirement:

I believe I first met Mitch at a burning building. Let me clarify: At the time we were volunteer firefighters on neighboring departments, which perhaps should again lead you to question our sanity. Later he moved and joined my fire department. He also became assistant director of our communications center just a year after I joined the Sheriff Department as a jail officer. Like him, I went from the jail to dispatch, and so up until now he's been only the second person in charge of dispatch since I got there, a quarter of a century ago.

It seems to me the only job more stressful than a 911 dispatcher is the boss of the 911 dispatchers. Oh, there are more stressful jobs, I assume: bomb disposal expert; Alec Baldwin's anger management coach; anything Mike Rowe does. I've been told twice that trained monkeys could do my job, both times by people who wouldn't make it through fifteen minutes of a Friday night shift in dispatch. Heck, they probably wouldn't make it through ten minutes on a Wednesday in October.

But at least I can (mostly) let it go at the end of the shift, go home, and think about other things. I don't have to worry about the off-duty ringing of the department cell phone. I'm a simple third shifter: I don't get involved in funding, hiring, training, scheduling, technology, dealing with government entities from townships on up to the Feds, and the constant, constant, meetings.

I hear a lot of armchair quarterbacking about my job, from people who don't know a football from a foosball. It's why I tried not to spend a lot of time second-guessing Mitch's job. I never wanted someone to say, "Fine: You try it."

In a profession where most people don't last long enough to take retirement pay, he made it through almost three dozen years. Mitch Fiandt earned his retirement. Congratulations, Mitch: I'd imagine you need the rest.

Although I've heard his wife has a long "honey-do" list, so maybe he'll come back.