A couple of years ago Emily and I set up a book signing booth at the Avilla Freedom Festival. We didn't get around to doing any author appearances last year, so when my sister-in-law suggested sharing a booth at this year's Festival, I jumped at it.

As book signings go, it might be close to a record--after all, a typical book signing is only for part of one day, not to mention being indoors. It'll be shorter for me this year, because although Cathy Hunter plans to be there the whole time (and my brother much of it, too), I'll be working during that period, so I'll only be able to be there part-time--and I don't know about Emily's schedule yet, either. But I want to be there at least a few hours Thursday and Friday, and all afternoon Saturday. We'll leave signed books behind for any buyers when we aren't there. 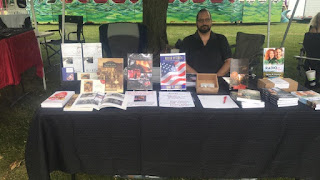 So look for us on June 20,21, and 22 at the Avilla Freedom Festival, and you'd better believe that will be in Avilla, Indiana. Cathy sells jewelry such as necklaces, and bracelets, good quality homemade stuff. Artists run in the family! There will be plenty of other vendors of many different things there. More about the whole thing later, when we're back from vacation.

We've put out two new books since our last author appearance, so we hope to see you there!