The answer is neither, kinda. Here's the full scoop: 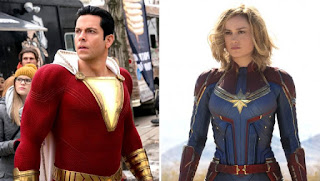 Here's a quick recap: Captain Marvel came along in 1939, one of the very first superheroes and, for a time, one of the most popular. Put out by Fawcett Comics, the title outsold Superman and led to a whole family of Marvels who were called, collectively ... ahem ... the Marvel Family.

But National Comics Publications decided Cap (yeah, some called him that) was a rip-off of their creation, Superman, and the resulting lawsuit dragged on for twelve years. (Captain Marvel didn't shoot lightning bolts at the time, and his powers really were similar to Kal-El's. Their alter-egos were both news people, and their big adversaries were both bald evil scientists.) 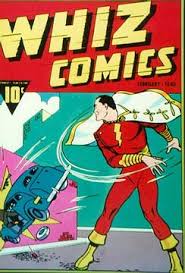 By the early 50s superheroes were losing popularity, so Fawcett caved and just buried their hero forever. Or at least until 1973, when the Big Red Cheese (as his arch enemy called Captain Marvel) was bought by DC--formally National Comics. But by then Marvel had their own Captain Marvel--in fact, there have been at least six variations of that name, by at least four different publishers, if you include Captain Marvel, Junior.

So DC started calling their guy Shazam, at least on the cover, which meant he could never actually identify himself. "Hi, I'm Sh--um, let me write it down for you."

When I last read comics regularly, Captain--um, Shazam was a member of the temporarily more humorous Justice League, which was also my favorite incarnation and darn, why couldn't they have kept that humor in the DC movies? For Shazam! the movie they went back to that, getting humor from the fact that the red-clad superhero remains, underneath it all, a fourteen year old kid. 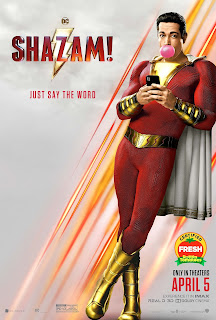 Although I didn't realize it, Shazam! sticks closely to newer details introduced when DC made major changes in its lineup. The story still features Billy Batson (Asher Angel), an orphan who keeps running away from group homes in search of his mom. One day a Philadelphia subway takes him to a way unexpected stop: the lair of an ancient wizard (Eijmon Hounsou, who ironically was also in Captain Marvel) who's been unsuccessfully searching for a pure heart to take his power. Billy ... will do.

Unfortunately, one of the wizard's previous rejections, Dr. Sivana (Mark Strong) successfully finds the lair, and gives in to temptation there (a demon orb, which really should have been in a safe). Now he also has superpowers, along with a cadre based on the Seven Deadly Sins, and is seeking to take Billy's new power for himself.

The joy of the film is in seeing the full grown Shazam (Zachary Levi) learn and deal with his powers, while still acting like a boy in his early teens. Joined by another orphan, Freddy (Jack Dylan Grazer), they experiment, have fun, and go just a bit overboard, until Shazam is brought back down to earth by his first honest to goodness villain, played straight and scarily by Strong.

As is my habit, I won't go much into the rest of the plot, but suffice it to say there's plenty of action and fun. However, I'd hesitate to let little kids go; the Seven Deadly Sin monsters are pretty darned scary, and there's a (funny) subplot involving Santa Claus that might not go over well with those who still believe.

It's a can't-miss cast, some of whom I can't describe because--spoilers. Special credit should go toward Billy's new group home family, including a group of awesome kids (and we all know kids in movies can sometimes be the opposite of awesome). My wife and I were especially happy to see a couple of favorite actors from favorite TV shows, although I won't describe who just in case others might get the same fun surprise we did.

Levi does an amazing job of bringing out the fourteen year old in the adult body, and he plays well with the ultra-serious Strong. There are plentiful shout-outs to the comics, but for the most part they don't interfere with the enjoyment for those who weren't already fans.

Entertainment Value: 4 out of 4 M&Ms. I'm not sure you can compare comic book movies these days, any more than you could compare, say, a romantic comedy to a romantic drama. I think I enjoyed this more than the other Captain Marvel, but wouldn't say it's better overall. Either way, I had a blast.

Oscar Potential: 1 out of 4 M&Ms. It's a great movie for what it is, but doesn't try to take itself seriously--which is the kiss of death as far as Hollywood recognition is concerned. 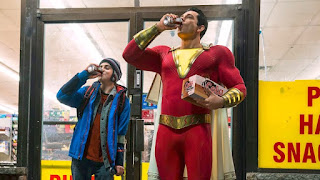