Many years ago I had a bedtime ritual: Prop myself up on some pillows and read a chapter or two of a book, while eating a Nutty Bar. Don't judge me, Nutty Bars are yummy. One particular evening I started a ten year old novel by Arthur C. Clarke, for a little reading time before sleep.

Only I didn't sleep much that night. I finished the book in the wee hours of the next morning.

Still, sometimes things aren't as good as you remembered, so thirty years later I once again picked up Rendezvous With Rama, this time with some trepidation. Would it hold up to my memories?

It did. Although this time it took me a few days to read, what with adult responsibilities and all.

Arthur C. Clarke was always a bit ahead of the game.

Unlike the real version, the book's asteroid turns out to be anything but: It's an artificial construction thirty miles long, moving so quickly that only one spaceship is in a position to intercept it. Having been on the move for possibly hundreds of thousands of years, the massive ship is dead and silent, but there still might be secrets to uncover inside.

When the crew of the survey vessel Endeavour manages to get inside the newly named Rama, they find a dark, cold, and dead world. But they also find a breathable atmosphere, a frozen sea, and incredible architecture held to the inside surface by the spinning craft's centrifugal force.

Then the lights come on ... and it turns out Rama isn't quite as dead as anyone imagined.

Here's the thing about Rendezvous With Rama: If a new writer submitted that novel to a publisher today, it would probably be rejected. It has little conflict between the characters, who tend to be rather two dimensional. It flows more like a series of wonders than a plot, in a way that reminds me of Jules Verne's 20,000 Leagues Under the Sea. There aren't really any bad guys here, except in one case in which a certain group of peoples' motives were, to me, a little shaky. Several scenes are set in a meeting where the members spend most of their time just speculating on what's going on.

So why is it still a page turner? Nobody could put the science in science fiction like Clarke. He manages to describe complicated landscapes and concepts in a way that's interesting, but still keeps the story cooking along at a good pace. He's one of those writers who can make exposition fascinating.

That's not to say there's not plenty of action too, as the human crew makes its way into the unknown, and encounters things that may, or may not, be out to get rid of intruders. The explorers encounter challenges and surprises galore, and Clarke does his usual great job of making an incredible thing both credible and scientifically accurate. It's as much a page turner today as it was the first time I read it, and holds up perfectly. It would make a great movie in the right hands (and a really stinky one in the wrong hands).

Also, it has one of the great twist closing lines in all of literature. 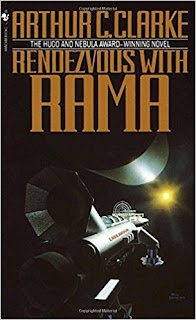