Walking Dead/Smoky and The Bandit crossover fanfiction. No, really.

So, I saw a familiar semi trailer on an episode of The Walking Dead last year: 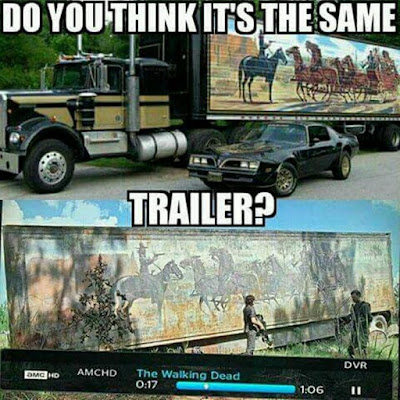 Turns out it is the very same trailer that was part of Bandit's semi (although if you ask me, it should have been called Snowman's semi, since he drove it through most of the movie). Well, that got my creative juices flowing. How did that trailer end up on the side of the road, during the zombie apocalypse?
So I wrote the story, and you can find it on the newsletter:

https://mailchi.mp/2abeb8e942f2/what-do-the-walking-dead-and-smokey-and-the-bandit-have-in-common?
Which, for some reason, seemed to erase the comparison photo above after I sent it out. So people are saying, "What's that funny little icon, and what semi trailer are you talking about?" And I apparently can't edit my newsletter once it's sent, which kinda makes sense since it's been sent since (say that three times fast), so I'm posting it here, too.

One of the fun things about fanfiction is that you can merge two worlds that would otherwise never exist. My old fanfiction can be found under Ozma914 over at fanfiction.net, and includes such things as a meeting between Doctor Who and Buffy the Vampire Slayer.
--------------------------------------------------------------------------
ONE LAST LONG HAUL
“Bandit, this is the Snowman. Looks like those deadheads got the highway backed up all the way up to the 360. C’mon back.”
Snowman released the mic before letting his frustration out with a series of curses. Not that anyone cared about cussing on the radio anymore, but old habits, and all. He braked the eighteen wheeler, looking for a way around the sea of walking dead that stretched across the two lane highway as far as the eye could see. Suggesting the herd stopped at the 360 mile marker was wishful thinking.
“Snowman, we’re working on it, son. But the interstate’s a no-go—full of parked cars to the Carolina state line. We gotta find a way through ‘em, even if you dent my rig.”
Well, then. Attracted by the truck’s rumbling diesel engine, the walkers had started moving his way. Snowman put the rig in reverse and started backing slowly, while considering his options. This was the part where he’d talk to Fred, if his poor old dog hadn’t passed away years ago.

Maybe it was for the best.
He was down to an eighth of a tank. The trailer, still decorated from the glory days with its bandit and stagecoach décor, was empty after a failed supply run to the south. He could always abandon it and try to hike around the herd, to get back to his friends and family.
It would take forever.
For a moment Snowman rubbed his three day stubble, then picked up the mic again. “Bandit … you find a place for the group?”
“I did, but we used up about all our gas getting there. Safe place, Snowman—I already dropped off your wife and kids, they’re fine. Guy in charge there’s got a tiger. A real tiger! You gotta see it. I picked up some more friends, too.”
Snowman chuckled, but he also understood Bandit’s underlying meaning. He had to see it. Had to get there, and with their fuel about out, that would be their last stop. No more long hauls across the countryside. Well, they were getting too old for that, anyway.
But first he had to get there.
“Now, son, don’t do anything stupid. We’re on our way.”
“Heh. Bandit, son, I think ‘stupid’ and ‘get through’ might be connected.” Snowman backed up more, being careful to stay between the lines. No tow trucks, not anymore. After some mental calculations, he backed up another hundred feet. It was all about force versus control.
There were thousands of them, shambling toward him. Thousands. And what if they someday turned north, and headed toward his family’s new sanctuary?
“Bandit, you make sure they get taken care of, y’hear?”
“Snowman, now, we’re almost there--!”
Almost there in what? That light little Trans Am? It wouldn’t make it past the first row. Snowman checked his safety belt, jammed the truck into gear, and hit the gas.
As he worked through the gears, the empty truck picked up speed quickly. He barely even felt the first impacts, as bodies flew right and left, but soon the rig began to shudder and lose momentum. The steering wheel jerked as bodies piled up beneath the semi. Snowman gripped it harder, his foot still hard on the accelerator.
There were so many dead. He got only a glimpse of one before it hit the corner of the cab—the guy was a giant, probably this biggest man in Virginia, or maybe the whole Southeast. At least, that was the instant impression Snowman got of him—six foot eight easy, closing in on 400 pounds. He must have been an easy target for the walkers, but he looked freshly dead … or as close to fresh as the dead got, these days.
The giant disappeared, and the big rig veered to the right.
The steering wheel spun out of Snowman’s hands. Without the seatbelt he’d have been thrown across the cab, as the semi launched itself across a ditch and into a field. Cursing, he hauled the wheel to the left and hung on as the truck jounced its way back toward the road, losing speed way too fast. Suddenly it surged forward—he’d lost the trailer in the grass behind him.
For a moment he thought he’d get control back, but now the engine began stuttering as he steered through a grassy area, looking for a good place to regain the pavement. When the front wheels hit the ditch again, they stayed there. Somehow he’d kept the truck upright, but as its engine went silent Snowman knew this was the end of the line.
He’d made it maybe three-quarters of the way through the herd. Now those that could still walk did, headed toward where they’d last seen noise and movement.
“Took a lot of 'em with us, though.” He had a knife, strapped to his belt. There was the metal bar by the door, the same one Bandit had used to check tire pressure since he hauled his first load, all those years ago. But when Snowman reached for it, it was gone, maybe bounced somewhere behind the seat.

“Well, now.” Snowman scooped up the mic. “Bandit, this is the Snowman, you got your ears on?”
“Snowman, you keepin’ the sunny side up and the bloody side down?”
Snowman gave a short laugh. “Son, I’m still up, but the rig’s down for the count. Didn’t quite make it through that crowd of deadheads, they’re worse than hittin’ Atlanta at rush hour. Don’t think I’m gonna make our rendezvous.” So close. His hand closed over the knife hilt, but already the dead were approaching the cab door, clustering up by the dozens. At least Bandit and Frog would take care of his family.
Then he heard a sound he’d never imagined hearing again. A sound he used to hate.
A siren.
“What?” Far ahead, through spatters and streaks of blood on the truck windshield, red lights flashed. A truck engine roared as it plowed into the herd. It moved forward relentlessly, the gore collecting on it blending with its red paint job.
A fire truck.
“Okay, Snowman, if you can’t make the rendezvous, we’ll just have to bring the rendezvous to you. Ten-four?”
As the truck got closer Bandit’s grinning face—how did he keep that handsome mustache in this mess?—appeared behind the wheel. He had two passengers, a small female in the front and someone he couldn’t make out in the back. The truck knocked down the closest walkers, then stopped in line with the semi cab. Bandit had to keep a little distance to allow for door clearance, and a few walkers stumbled forward until the figure in the back opened his door and drew a revolver.
Holy crap. It can’t be.
“What are you waitin’ for, you sumbitch? Get your ass in the truck!” Hanging from the cab, Sheriff
Buford T. Justice took one-handed aim and blew a hole in the nearest walker’s head. Three more shots, three more dead-on hits. Then he scooted across the back seat—pretty quickly, for someone his size—to give Snowman room.
It was an easy jump from semi to fire truck. Well, easy when you didn’t want to touch what was jumbled across the pavement between them.
As soon as the door closed, Bandit put the truck into reverse. His legendary driving ability served him well as he backed up in the same path he’d entered, using only the side mirrors to navigate. A few more walkers had stumbled into that route, but proved no problem for the fire engine’s powerful motor. Through it all, Bandit still had time to flash his friend a grin. “You all owe me for that truck!”
“But how--?” Snowman flailed his arm toward the uniformed man beside him, who he now
realized had lost a lot of weight. “How--?”
Justice made a dismissive wave, then realized he still held the gun and holstered it. “You think the gol-durn apocalypse is gonna keep me from tracking you and the Bandit down?”
Snowman glanced at Frog--no, Carrie, since CB handles hadn't mattered for a long time. She'd turned to kneel on her seat so she could see them. He saw the sympathy in her eyes, which made him look at Justice more closely and see the hangdog look, the dark bags under his eyes. His hat was gone, his hair pure white. “Sheriff … um, where’s Junior?”
Justice made a scoffing noise. “After my wife passed on, Junior wasn’t worth a bag of hair.” He squared his shoulders. “He went down fightin’ though, I’ll give him that.”
“I’m sorry, Sheriff,” Carrie said. “He was a good boy.”
“Yeah, well. After that, seemed like there wasn’t anything left but pursuin’ you all. So that’s what I did.”
“You caught us, sure enough.” Having made it through the horde, Bandit turned the truck around and accelerated away. “We’ll be out of gas by the time we get back to that crazy king and his tiger, so looks like our chasing days are over.”
They were all silent for a moment, as the truck roared down the road. “Guess my wife will be glad about that,” Snowman finally said. “So, how did you find that place, anyway?”
Bandit laughed. “Got waved down by a guy who looks exactly like Jesus, he pointed us that way. Said we’d fit right in.”
“So—you let Jesus take the wheel?" Snowman couldn’t help laughing. "Ten-four."
Tags: fanfic, fanfiction, fiction, smoky days and sleepless nights, the walking dead, writing
Subscribe