T'was the night before Christmas when I met my partner, Mary Darling, for our Christmas Eve shift in the City of Angels. "Merry Christmas, Darling." The squad room's halls were decked.

"Feliz Navidad," replied Darling, who's been taking Spanish lessons. "Looks like we'll have a white Christmas."

"Maybe it'll be quiet, and we can spend the night at the station, rockin' around the Christmas tree."

But our wonderful Christmas time was interrupted by a radio call.  Darling listened to the dispatcher, then turned to me. "Do you hear what I hear?"

"Yeah," I said. "Grandma got run over by a reindeer. Looks like somebody's going to have a blue Christmas."

We took a sleigh ride to Candy Cane Lane, where we found Grandma under the tree, being treated for facial injuries. "All I want for Christmas is my two front teeth," was all she'd say, but we had two witnesses: her granddaughter Noel, and Noel's boyfriend, a rap singer who went by Little Drummer Boy.

"It was a burglary," LDB started to say, but Noel wanted to be the first.

"It was Santa, baby," Noel said. "I saw it, too. I saw mommy kissing Santa Claus. When Grandma caught them she chased him, but she hadn't put on her Christmas shoes and he got away." 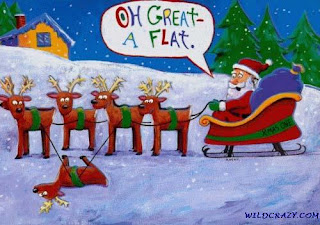 "So the reindeer didn't run her over?" Darling asked.

"No, she tripped and fell into the holly and the ivy. You can see how her white gown now has greensleeves, and forget the Christmas shoes; she fell so hard her slippers are up on the housetop.  Just ask Frosty the Snowman, he was there."

But Frosty had gone home for the holidays, and I began to suspect there was more to this than what could be put into the morning pretty paper. "Noel--Noel? Did you hear anything before the attack?"

"Yeah, I heard someone say "Here comes Santa Claus! Then I heard jingle bells, and I figured Santa Claus was coming to town."

"Did your mom say anything?" Darling asked.

"Just 'Santa, Baby'." Then they saw Grandma come in, and Santa went running out the door. The last thing I heard was him yelling 'Run, Rudolph, Run!' Then I went out and saw Grandma got her jingle bell rocked."

But she shrugged him off. "let it snow. I saw you flirting with our neighbor, Carol, under the silver bells. I heard you offering to bring Joy to the world. You just want to be the man with all the toys."

"No, baby--all I want for Christmas is you."

"Yeah, I bought all that when you gave me silver and gold last Christmas. But it doesn't have to be that way."

I couldn't believe it. Do they know it's Christmas? Well, there wouldn't be any peace on Earth tonight.

I'd walked out into the silent night, to where Grandma had been found in the snowfall. But there were no other footprints in the snow, or sleigh tracks. Santa Claus may be back in town, but he hadn't been here.

But Little Drummer Boy was wearing a red parka. "I don't think you're telling me the whole truth about Santa, baby." Reaching out, I drew the parka hood over his head. "Noel, does this look familiar to you?" 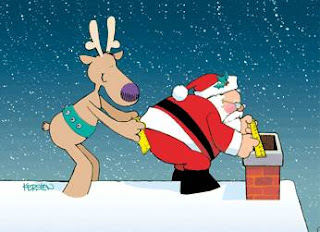 Under the tree, Noel's mom shoved away from grandma and growled, "Fine, you caught us ... the Little Drummer Boy was giving me a holly jolly Christmas, all right? I didn't want to be all alone for Christmas, and he was on my grown-up Christmas list."

I shook my head. "But don't you see that Santa Claus is watching you?"

"Yeah?" She smirked at me. "Well, he's seen a lot, if he's been watching the last twelve days of Christmas."

"Mom!" Noel gasped. Then she turned around and slugged LDB in the mouth, right under the mistletoe.

"I hear bells," LDB said as he faded out. It would be a silent night for him.

Later, after we filled out the paperwork, I asked Darling, "Mary, did you know?".

"Oh, I knew LDB must be Santa." Darling took a drink of eggnog (non-alcoholic--we were on duty), and added, "He really got his halls decked."

It looked like LDB and the mom had something else in common: They wouldn't be home for Christmas. For the rest of us, it's the most wonderful time of the year. But for them?

Well, I figure they got nuttin' for Christmas. 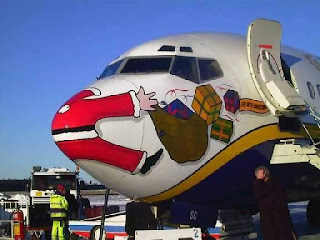