A new excerpt from "Hoosier Hysterical"

I noticed a little uptick in sales for Hoosier Hysterical last month, so in the service of shameless self-promotion I decided to throw you a little excerpt from Chapter Three of the book. (Actually, I do feel a little ashamed when I self-promote, but I'm trying to get over it.)

Why Chapter Three? Well, you probably haven't seen that part unless you've actually bought the book yourself.  And even then you may not have seen it. My idea is to build sales uptick on sales uptick, and before you know it: an interview on "Good Morning, America".

Also, I went to all that trouble to learn how to spell "excerpt", not to mention double checking the definition, so I figured I should make it worth something.

(Also because we've officially started another history related book project, but more about that later.)

As all fourteen of my regular readers know, Hoosier Hysterical: How the West Became the Midwest Without Moving at All is an illustrated humor book about Indiana history and trivia. The book is illustrated, not the humor.

You Say You Want a Revolution?

So our story of Indiana in the American Revolution starts in Kentucky, and goes to Virginia.

Haven’t you ever gotten lost on a long trip?

Not That Clark—The Other One

George Rogers Clark was a surveyor, and one of the first people to venture into what would be Kentucky. When war broke out, Clark went to Virginia, which claimed most of the lower Midwest at the time, and met with a governor by the name of Patrick Henry.

“Hey Gov, can you help me raise an army and kick Henry Hamilton’s hairy hind end?”

“Oh, sure, I’ll just hand over money to a surveyor with no military service, so you can leave the real fighting and wander around an Indian infested wilderness nobody cares about.”

“Okay, let’s work on your sense of sarcasm.”

Clark gathered up about two hundred farmers, who brought their own rifles and knives but no uniforms—just buckskin clothes. They reached Indiana at the Falls of the Ohio, which means I’ve mentioned almost all the future states along the Ohio except Illinois. Then they went to Illinois.

Specifically, this untrained rabble of farmers and trappers decided to attack a fort at Kaskaskia, which at the time was on the east bank of the Mississippi River. (Now it’s on the west bank, surrounded by Missouri—long story.) It would, clearly, be a disaster.

They took Kaskaskia without firing a shot.

French settlers remained in the area, and they promised to support Clark if he, in turn, promised to guarantee them freedom of religion. He said “Sure—we’ll work it into a constitution”, and together they marched through frozen swamps back into Indiana, where they found the fort at Vincennes unoccupied.

Clark didn’t like that. Patrick Henry probably wasn’t thrilled, either. 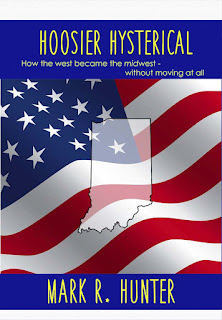 It goes without saying that Hoosier Hysterical and all our books can be found at http://markrhunter.com/, and on Amazon at https://www.amazon.com/Mark-R.-Hunter/e/B0058CL6OO, and other fun places including the trunk of my car, and yet I said it anyway. 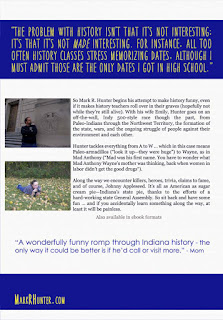 Emily and I previously conspired on--ahem--co-wrote two other history related books and a collection of my humor columns, so I'm calling us semi-pros.