See, I have this brother, and he hates to have his picture taken, so whenever he sees a camera he makes one of those faces, like if you were watching one of the Three Stooges being strangled by the other two. The only way to get a decent photo of him is with a sneak attack.

Luckily that suits my style of photography, which is to keep taking pictures by the hundreds until one of them happens to be in focus.

I don't know, maybe he's afraid that if I get a nice pic of him I'll post it online, like this:

That's his long suffering wife Cathy beside him. They've been married so long that she slaps him uptop the head before he says something dumb. My wife does that to me, just on principle.

But the one I really liked--and it's almost a miracle that I got two good pics on the same day--happened a little later. This was at our big annual family gathering, by the way, which happened at the end of July. That explains why I wasn't around over the weekend: I spent all day Sunday digesting.

I see no need to explain why I cropped that photo. Was I really focusing on a kid at the end of the table? Yes. Did the camera accidentally focus on a beverage container instead, which just happened to put Jeff into focus? Yes. But why admit that?

Anyway, Jeff has been fighting cancer for awhile now and is doing one of those infusion therapy things, so we're all really happy to have him around. Whether I'll be around after he sees this, I don't know.

Speaking of happy to have them around, here's a photo from the gathering of the surviving three children of my Mammaw and Papaw (no, I don't know how to spell those), who lived in an honest to goodness holler in Kentucky:

And just to throw this in because she's so darned cute is my niece, Abby: 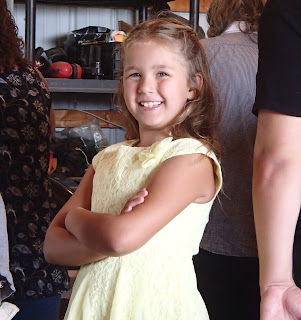 I also have some photos that might be valuable for blackmailing purposes later. Whether you'll ever see them depends largely on how nice people are to me.