Fire at the Wolf Lake, Indiana, Bar and Grill

Several area fire departments responded at around 10:30 a.m. Wednesday to a fire at the Wolf Lake Bar and Grill, along US 33 in Wolf Lake. One firefighter reportedly received minor injuries in a fall; the cause of the fire remains under investigation.
Units of the Albion, Churubusco (Smith Township), Cromwell (Sparta Township), Noble Township, and Thorn Creek Fire Departments responded (let me know if I missed anyone).Other units came in to provide standby, including a Kendallville Fire crew that stood by at the Albion fire station. US 33 was shut down for some time, and some firefighters were still on scene after more than four hours.
http://wane.com/2018/01/24/fire-damages-wolflake-tavern/
This photo was posted on the WANE-TV website. I post it here because, if you zoom in and look very closely, I'm in it. (I'm the guy in the middle with a blue helmet, back turned to the camera.) 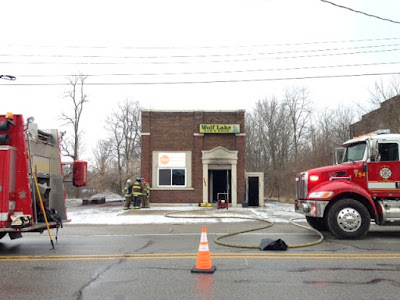 The rest of the photos were taken by me when my partner and I did a walk around of the building late in the fire, as part of our position as the RIT (Rapid Intervention Team). Our job, basically, was to keep an eye on things and react if any of the firefighters inside or on the roof got into trouble. 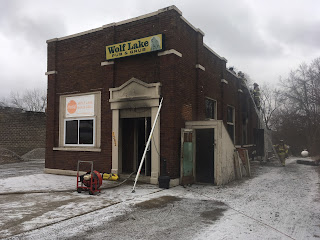 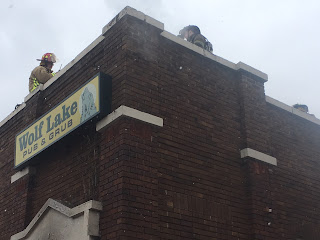 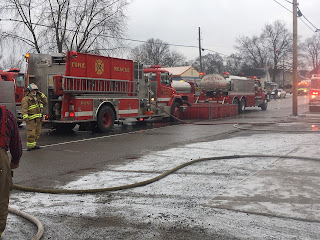 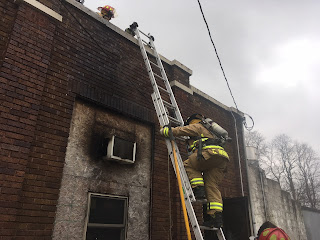 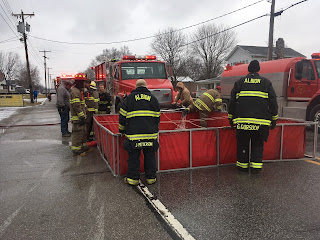