First, I need to apologize to the author, Jaymie Simmon: I read this book two years ago, and never got around to reviewing it. From that standpoint, there are several authors I need to apologize to. Not that Simmon needs my help: The God Gene, her first novel, was the winner of the 2013 National Indie Excellence Award for Literary Fiction.

Rosalind Evans is a cancer researcher, doing God's work, so to speak, as she tries to cure the disease. Then, while dissecting the genetic code at the center of the second chromosome, she discovers it spells out ... the Ten Commandments.

Evans is sure her top secret facility has been hacked, or it's the world's worst practical joke ... but others think she's responsible. While she investigates, a popular blogger learns the secret, which goes--again, so to speak--viral. Soon, despite Evans' own conviction that it's a hoax, the world is (naturally) arguing over whether there's a message from God in their DNA. To some it's a miracle; to others, a danger to their beliefs and their power. 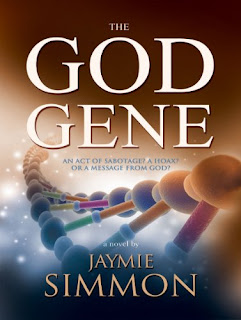 One reader called this "religious fiction", which I didn't see at all; if anything, organized religion comes off looking pretty bad in this story, as does just about anyone in the establishment. Others seem to consider it satire and humor, which may be more accurate. Simmon takes the story itself very seriously, although some of the characters certainly had their moments. If anything, it's a political thriller with some science fiction thrown in, although it could also be thought of as a mash up of the movies Contact and Oh God!

In any case, Simmon does a great job with her characters, most of whom spend the book desperately trying to twist the discovery--or bury it--for their own gain.Very few people with any power come across looking remotely good, and overall you get the impression that this is just what would happen in real life. The public in general represents a character of a sort, and also become a threat to Evans, who's slow to pick up on just what a Pandora's Box she's opened.

Another character is the city of Chicago, where Evans works and where most of the action takes place. I didn't have to look to tell Simmon lived there, and her description is lovingly detailed. In addition, her subject matter is carefully researched, the characters memorable and dialogue realistic, and she manages to make DNA research interesting. There are plenty of twists to go around as Evans and other characters try to figure out what's going on, each coming in with their own set world views and each finding them challenged.

The God Gene is one of those rare books that's both thought provoking and great entertainment, and as a fellow author ... I'm jealous.