The Fearless Deer of Pokagon

Deer are so common in Indiana that sometimes we forget they were once wiped out in the state. Now they're back, wiping out cars instead, so you really don't have to try to hard to see some. Still, seeing them up close doesn't happen too often, unless it's in that instant when you stand on your brake and yell, "Oh, crap".

Earlier this year I was hiking on trail 9 at Pokagon State Park. Trail 9 is the one marked "rugged" ... which is a relative thing, as I've been on more rugged trails in other parks, but it's still a bit of a challenge. I was on a ridge, wishing for an excuse to stop and catch my breath, when I saw two deer standing on the next ridge over.

Sadly I didn't have my camera with me, but I did have my cell phone in case I needed to call in an ambulance to haul me out of there. It turns out those things have cameras on them. Who knew? So I stood there as still as I could, zoomed all the way in, and tried to get a decent photo of them before they ran off, which one soon did.

Then a strange thing happened. 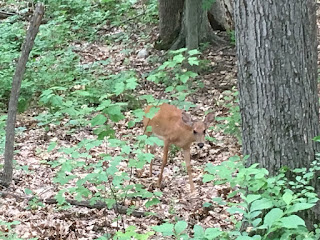 The second one decided if I was checking her out, it was only fair that she check me out. So she got closer ... 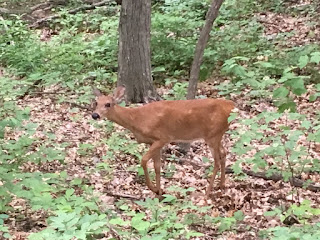 And we ended up in a staring contest, only about 25-30 feet from each other. 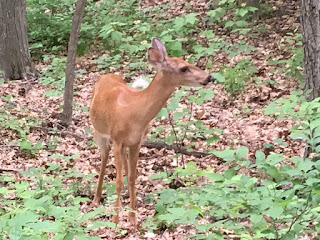 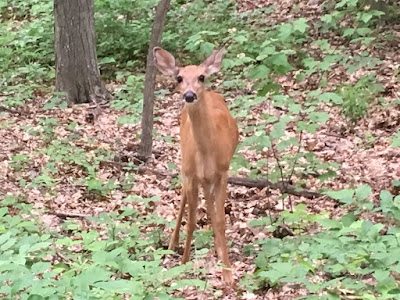 Hoping to seem less threatening, I tried to crouch down. It was probably all the creaking bones and cracking joints that scared her off, and last time I saw her, she was standing with the other one on the same ridge where they started.

You can see deer close up at various places, but there's something about standing in the open and going nose to nose with an animal just as curious about me as I was about it. It was, in other words, very cool.