Eclipse: totality worth it

I took a few photos when we were in Missouri to see the total eclipse, and I thought I'd pass some on. Not of the eclipse itself--the video I posted a few days ago is about the best I could do with that.

We were at the Meramec State Park near Sullivan, Missouri. You can learn more about it here:

I've been describing it as central Missouri, but it's only about 60 miles from St. Louis, so it's really more east central Missouri. It has rugged hiking trails, caves, zero cell phone reception (which is both a good and bad thing), and it edges the Meramec River, so there's the swimming and boating thing. A really nice place that we're hoping to visit again something, a couple of hours from Emily's parents' house.

More about the park later--I have lots of pictures. But I didn't have the best camera there: 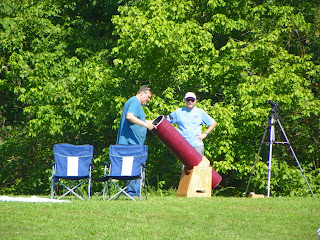 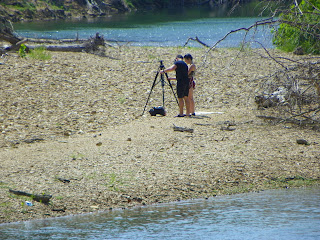 There was a good crowd, and we were thankful to have headed there in the wee hours of the morning, even though the roads there and the park itself were both pretty out of the way.

The park had a big awning up with activities and information, and even a board where visitors could show they were there: 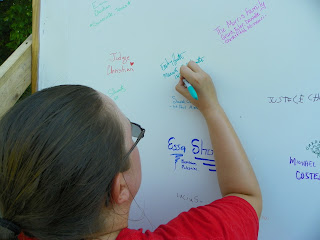 As cool as the partial eclipse was, the wait for totality seemed to take forever, especially with the temperature hovering at around a million degrees while we stood in the sun and stared upward. Did I complain? I did not, having been convinced for weeks that it would be cloudy that day, wherever we were. The good thing about being a pessimist is that you're never disappointed. 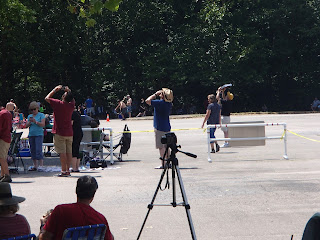 Some of us were more relaxed than others: 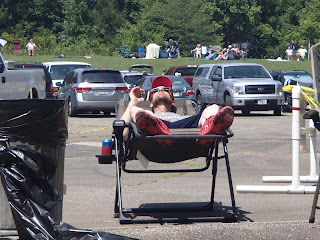 Considering how much my neck hurt the next day, he has a point. But considering how little he moved throughout the lead-up to totality, I wonder how sunburned he got--we kept ducking back under the trees--and whether his eyes were sore later. At least he brought enough cigarettes.

As the eclipse advanced, we began to see a curious effect that's common with partial eclipses. The vanishing sun continued to shine through the trees, which produced a pinhole effect that allowed us to see the eclipse on the ground below: 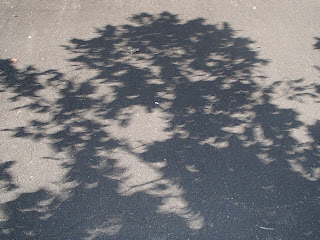 As it grew darker, a dog that belonged to people nearby dragged his blanket out, pulled it into a circle, and got ready for bed. He was very confused when nap time ended so quickly. 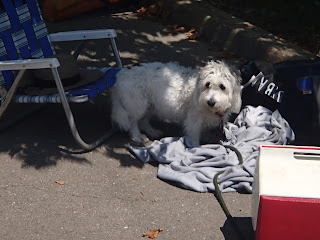 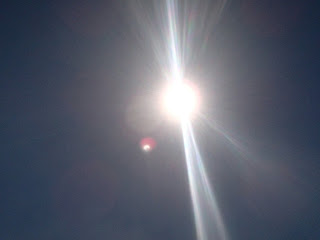 Yeah, that's totality. It's just that my camera couldn't handle it. Here's Venus coming out, beside a jet contrail: 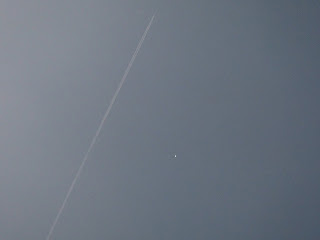 Seeing some of the other cameras set up there, I'll bet there are a whole bunch of much better pictures. I took a few and then put the camera down. Emily and I just stood there with our arms around each other, taking it in. I've said it before: Even the best photographs, with the best cameras, don't begin to do a total eclipse justice. There's nothing like seeing it with your own eyes. And, although we certainly had ups and downs on that trip--it was totality worth it.