Snakes On a Blog

Stop! I know how much I'd like people not to show me photos of spiders, so I'm begging you to go no further if you hate photos of snakes.

'Cause here are some photos of snakes. Specifically, to remind you warm weather is not all good, here are photos of snakes I stumbled upon (almost literally) at Pokagon State Park near Angola. I should add that, considering how much time I've spent up there the last few summers, seeing only two is actually a pretty good average for you snake haters. 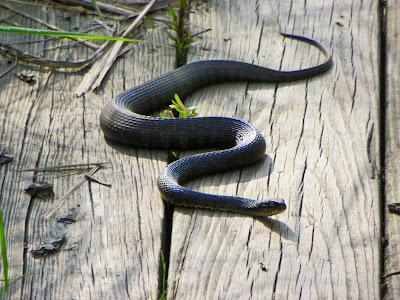 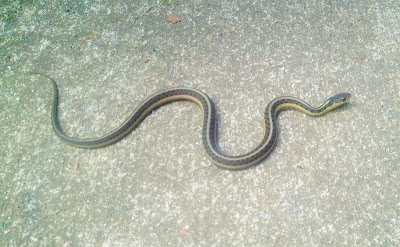 This little guy really was kind of little. I suspect he was a teenager, as teenagers sometimes like to pull pranks. In this case, our friend the garter snake staked out a place in the middle of that little concrete pad right in front of an outhouse door. So if you're a human going to the bathroom, you have to go past a little wooden wall, turn a sharp corner, and BOO!

Oddly enough, he didn't really scare me, but he did almost get stepped on, which would have taught him a lesson in how pranks can backfire. I assure you, if it had been a spider a third of that size I'd have left a Mark-shaped hole in the wall, in whichever direction I happened to be pointed at the time.

I'll see if I can get you some flower photos next time.