Here's the news release I sent out earlier this month for our appearance at the Avilla Freedom Festival. It might be a good template for other authors to use, if you get set up for a book signing of your own. Or ... it may not be, since I came up with this myself. I have questionable confidence in my self-promotion ability. As usual, if you should know the news director for a major TV network, feel free to pass this along.


News Release
Local Author to Appear at Avilla Freedom Festival
It might be an unusual location for an author appearance, but a local writer will be one of the venders at the Avilla Freedom Festival this year.
Mark R. Hunter of Albion and his wife Emily, who has co-written and edited some of his works, will be at the Festival along with other various venders, June 22-24. He calls it the “longest book signing ever”: They’ll be selling their works from 4-9 p.m. Thursday and Friday, and from 9 a.m. until dusk on Saturday of that week.
The Hunters have nine printed works, in addition to three others that are available as e-books only. Their most recent written together was last year’s Hoosier Hysterical: How the West Became the Midwest Without Moving at All, a humorous take on Indiana history. More recently Torrid Books published Mark R. Hunter’s romantic comedy novel, Radio Red. Set in Michigan, it’s his first published work not connected in some way to Indiana.
Together the Hunters specialize in not specializing, as their books cover several genres. Mark Hunter’s solo works are romantic comedies and a short story collection; he and Emily worked together on books covering history, humor, and young adult fiction. Together they’ll have copies of nine books available at the Avilla Freedom Festival, at prices discounted for the event.
The Avilla Freedom Festival’s website is: http://www.avillafreedomfestival.com/
More information about the authors can be found at www.markrhunter.com, or on Amazon at amazon.com/Mark-R-Hunter/e/B0058CL6OO.
Mark R Hunter can also be found on Facebook at https://www.facebook.com/MarkRHunter/, and on Twitter at @MarkRHunter 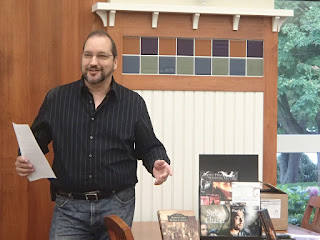