Adam West and your Batman 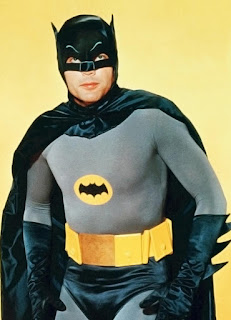 The death of Adam West immediately resurrected the old argument: Who's your favorite Batman?

It's ironic that Roger Moore passed away so close to the same time: His death, of course, caused a chorus of favorite James Bond arguments. They both held similar positions in their perspective portrayals: They were the lighter, more colorful ones who weren't afraid to poke a little fun at their genres.

That being the case--especially with West--the argument becomes apples and oranges. What, I can't have both? A big navel orange, followed by a nice Red Delicious? Comparing Adam West to, say, Christian Bale is like comparing ... hm. Oh, I know: Like comparing "Battlestar Galactica" to "Battlestar Galactica". Love or hate the reboot, it just wasn't the same show as the original.

I've probably just started arguments that would rival fights among British football fans, but there you go. 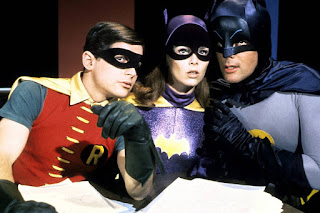 Look at the above quote, and picture Michael Keaton's Batman saying that. Look at the photo, and imagine Christian Bale's Batman cavorting with a purple Batgirl or a bright red and yellow Robin. Ain't gonna happen. For that matter, imagine Ben Affleck making fun of his Batman on an episode of Family Guy. (Clooney would probably do it.)

My point is, you can like them both, or all, even Val Kilmer if you want. If you're a sports fan, the analogy is that you can like both the Cubs and the Bears: They're both in the same city, but they're two different animals.

So embrace and remember the fun that was Adam West. We should all be so lucky as to bring that much joy to such a wide audience.