Where No Author Appearance Has Gone Before

We're in the habit of holding author appearances in unusual places, so why stop now

This year Emily and I will be vendors, at the 2017 Avilla Freedom Festival. My very first book signing was at a 2011 First Friday event in Albion, so we've been outside before, and we've been in vendor-type festival situations before. The change this time is that we're going long term--three days straight, June 22-24.

That's quite a challenge for us--especially Saturday, which goes all day. The longest book signing we've ever done was, I believe, five hours. I have this figured as being something like twenty hours, total. I'm worried about how much interest we'll get, but it has the advantage of being in a town where we've never had a signing before. (And the disadvantage that I'm probably not all that well known there. Although on the other hand the paper that publishes my column, 4County Mall, is based in Avilla.) It also has the advantage of being our first signing since the release of Radio Red.

I hope you'll all join us. Naturally we'll have some discount prices and deals, and we're also going to figure out some giveaway stuff ... but even if you don't come to buy, don't let us be lonely for all that time! Stop by and say hello, and stay for all the other stuff going on. After all, it's an entire festival, not to mention a car, truck, and motorcycle show.

Selling stacks of books outside in early Indiana summer. What could possibly go wrong? 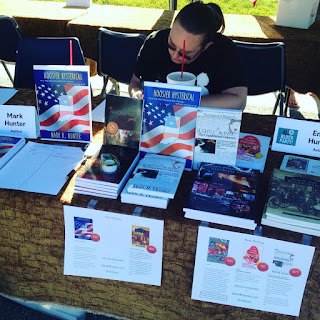