A certain percentage of the population will insist that if they can do something, it's easy for anyone to do.

Example: I take a woodworking class in high school (because an industrial arts class was required and I wasn't any good at getting out of that kind of thing). "It's easy. Anyone can use a saw and sander, and make a bookcase."

Well, I have a dozen bookcases, and I didn't make a single one of them. I also have an Incomplete in woodworking class.

Keeping a small engine going is easy, with just a little training and practice. Tell that to the crew of the passing 747 who found a piece of my mower blade and a spark plug embedded in a wing after the infamous Exploding Lawn Mower Incident of 1998. I don't care how much the federal investigator claims it broke the laws of physics.

So when I tell you I'm a little nervous about installing our new water heater, I don't want to hear any of that, "ah, it's easy" crap. The E.R. has a special "ah, it's easy" treatment room. It's right next to the "hold my beer and watch this" ward.

My wife spent the better part of a day researching the best replacement for our heater, which recently went from a small leak to rinsing the basement floor, and wasn't that nice of it to help keep the place clean? Then we drove to the store, and discovered it would fit into our Ford Escape with exactly half an inch to spare. Then came getting it out of the SUV and down the basement steps, which make two sharp right angle turns: One at the inside of an L shaped wall, one at the basement door. Picture it. The new heater weighs 130 pounds, which is still less then the piece of my lawn mower they found inside a barn six miles from my lawn. 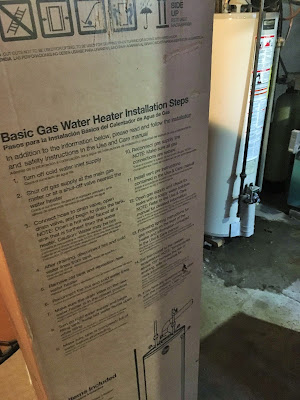 And that was still the easiest part of the job, although my back denies it. The rest comes later this week, when I have to remove the old water heater and install the new one. The instructions are pretty plain, step-by-step, and involve electricity and natural gas.

But not to worry: Someone will show up to help, they always do. No one really wants to see my house blow up. That I know of.

I'm sure it'll work out fine. Or if you don't hear from me later, look for a video similar to this one: