Indiana Winters, or: Why Aren't We Living in Florida?

SLIGHTLY OFF THE MARK
(Note: This was originally written on February 7th and then misplaced, which isn’t the first time. It was the beginning of what was overall a nice February—for Indiana. You all know how things changed in March.)
Ah, spring.
Or, possibly, &$@# spring!
That’s the way it is, with springtime in Indiana. It’s feast or famine, a saying that goes well for farmers wondering if they’ll be able to get into their fields early, or ever.
I was reminded of spring just a few days after that stupid groundhog predicted six more weeks of winter, a prediction that’s essentially meaningless in Indiana. There are always six more weeks of winter—we just don’t know when. It could start next week. It could start next month. (Note: It did.) If you’re having a mild winter, like we had this year, a backlash is almost guaranteed. I’m worried about whether spring is going to be full of terms like “polar vortex”, “late winter snowstorm”, and “Is that groundhog still alive? Get my gun”.
On this particular day my wife and I got out of the car while shopping and simultaneously cocked our heads, which come to think of it probably looked pretty funny.
“Is that a bird?” I asked.
“That is a bird.”
“But that’s not a bird we usually hear in February.”
“No, it’s a spring bird.”
It was indeed a spring bird, one that was soon to be very, very unpleasantly surprised. On that particular day, the outdoor temperature hit the mid-forties. Two nights before it dipped into the teens. Two days later it hit sixty and we had thunderstorms, followed a few days after that by snow.
A typical March in Indiana, the only strange thing being that we heard the bird in early February. As you read this is should now be March, which means (if you live in the Midwest) you’re dressing in layers to combat both frostbite and heat stroke, possibly on the same day. But for February, that weather was actually pretty good.
February is usually easy to forecast. You have two choices: It’s cold and it’s going to snow, or it’s not going to snow but even colder. (Note: I said usually.) But spring—spring is different. Here’s a typical Midwest meteorologist in, say, mid-March:
“Looks like a blizzard headed our way, folks—oh, wait. The radar just updated, and the blizzard has been sucked up by a tornado! I think we’re going to see some serious snow drifts.”
We have something called March Madness, which most people think is about basketball playoffs. But in Indiana, March Madness translates to ice season: that time of the year when sleet and freezing rain fall as often as snow.
“Aren’t those icicles on the electric lines pretty—oh, the power’s out again.”
Occasionally we’ll have a dry spring, and instead of frozen precipitation you can see columns of smoke in every direction, often accompanied by sirens. This is called grass fire season, and generally comes just after March Madness. People realize they can finally walk outside without fifty pounds of outer clothing, and their first thought turns to the mess their lawns have become over winter.
“What shall we do with all these branches, leaves, weeds, and trash? Oh, I know—we’ll burn them! The ground is still wet; what could possibly go wrong?”
Pro tip: All that dead plant life around your fire is plenty dry, fella. The ground being wet simply means fire trucks can’t go off road to extinguish that wildland fire you just started. And then firefighters end up out there, ironically, trying to beat the heat with their own fifty pounds of outer clothing.
But it’s spring, so who knows? I’ve helped fight a few grass fires that I had to walk around snow drifts to reach. I’ve gone out on tornado watches in March. (Terrible idea, by the way—the basement’s way calmer.) I’ve shoveled snow in May. And all the while those poor, confused birds are flying around up there, trying to figure out whether they should be heading north or south.
They’d better decide fast, because if they head west they’ll run into a blizzard, and if they fly for the East Coast they’ll run into an even bigger blizzard.
So yeah, I’m worried about that bird. What is he living on, anyway? If he pecks the frozen ground for worms he’ll break his beak. The first bugs don’t come out until … well, about now, if you include mosquitoes.
In fact, it’s not uncommon in Indiana for the big piles of plowed snow to still be melting off in July. Sometimes, on the first really warm days, you can see kids skiing down snow mountains at Wal-Mart, then surfing on across the parking lot.
It’s why I often call Indiana the greatest place in the world, except during winter. Luckily, surviving winter is like surviving pain: Once it’s over, you tend to forget how bad it is. By the end of May you can put your snow shovel away (you might want to keep the gloves and wool hat out, just in case), and enjoy the outdoors, until it gets hot.
Maybe the hot is why we’re not all living in Florida. 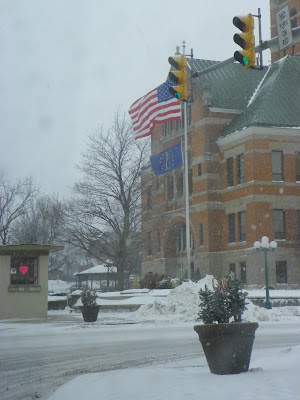