First off, a warning: "Logan", while technically part of the X-Men franchise, is not what most people would consider a comic book movie, and is not, not, NOT for kids. Of course, there are plenty of movies based on comic books and graphic novels that can be enjoyed by both kids and adults. This, in what's probably a coming trend thanks to "Deadpool", is not one of them. 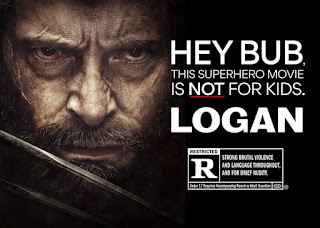 And that's about the only thing "Logan" has in common with "Deadpool". In fact, "Logan" sometimes seems a lot like "The Walking Dead": It's locale appears dystopian, upbeat moments are few and far between, and you get the sense that anyone--or everyone--could end up dead. Also, a lot of people tend to die with things stuck in their heads.

Logan is, of course, former X-Man Wolverine, played with intense weariness by Hugh Jackman and why the hell do people never get Oscar nominations in movies like this? The Academy Awards are pointless if Jackman and Patrick Stewart (as Charles Xavier) don't get nominations. It's 2029, and as far as he knows Logan, Charles, and their helper/babysitter Caliban are the only mutants left in the world. From their Mexican hiding place Charles keeps talking about communicating with someone, but his formidable brain is failing from a degenerative brain disease and he rarely makes sense at all.

It's a wonderful performance from all three of them, and when Jackman and Stewart share the screen it's--well--uncanny. 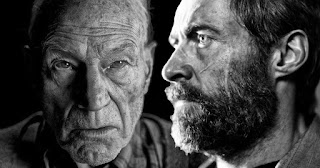 Logan is now a chauffeur, when he's not bargaining for medications to tamp down Charles' mind-seizures. It's hinted that those seizures, which send his telepathic abilities lethally out of control, may have killed some of the X-Men, while Caliban has his own guilty secret along those lines. As if that wasn't enough, Logan's healing powers are starting to desert him, and he's feeling very much his 200 or so years.

This was all covered in the first twenty minutes. Then the trio's "idyllic" life is interrupted by an eleven year old kid and the private army that wants her, dead or alive. They take Caliban hostage and send Logan, Charles, and little Laura on a Hope and Crosby type road trip, assuming Hope is a ninety year old degenerating telepath, Crosby an ailing alcoholic, and Dorothy Lamour a psycho kid mutant.

Yes, of course Laura's a mutant. And, although Logan spends most of the movie trying to avoid it, she both needs his help and shares a direct connection with him that's pretty obvious early on. Together they cut a swathe from Mexico to Canada, headed for a place Logan's certain is literally a comic book creation.

Okay, but is "Logan" any good?

Yeah. It's one of the best movies I've seen in years--maybe the best, in terms of story and acting. In addition to the actors, the movie should get an Oscar. It won't.

Stewart is emotional and heartbreaking. Jackman is intense in his final pass as Logan, a man who's deteriorating rapidly but still has promises to keep. He's the old Western gunslinger and the movie's a western, and just in case you don't get that, two of the actors actually sit and watch the movie "Shane", which gets a callback at the end. The casting is great overall, the action sequences sometimes a bit long but impressive, the (fairly limited) digital effects seamless, and the cinematography wonderful. 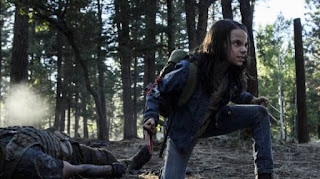 Special notice should go to Dafne Keene, in her first movie role as Laura. At first the kid is mute and mostly glares, something I figured just about any kid could manage. But then ... wow. She waxes eloquently in two languages, holds her own in action sequences and with impressive older actors, and towards the end has a few moments that are just heartrending. If she doesn't crash and burn early, Keene will be an acting force to be reckoned with. (Hey, I was right about that kid from "The Professional".)

You'll want to sit through the end credits (although there's no after-credit sequence), both to collect yourself and for the spot-on Johnny Cash song.

Oscar Potential: 4 M&M's--the good brown ones. No, it won't get many nominations, which is just a sign of how out of touch the Hollywood ivory tower people are. It would be nice to be wrong.