It's a Trappist! ... In Twelve Parsecs

My first thought, as you might imagine, was: "Wait--I thought 'dwarf' was now an insulting, politically incorrect term, like 'midget', or 'calm political discussion'. Sure, you have dwarfs in online gaming, but that's a whole other thing. Have you ever tried to get an Orc to clean up his language?

"Excuse me, Mr. Orc, but the proper term is 'little people'. Wait--what are you doing with that double bladed ax? Help!"

Anyway, my second thought was, "Someone needs to help protect that poor dwarf from those seven--seven? I mean, not me--I have an appointment. My sciatica is acting up. Danger makes my ears bleed."

Turns out it was a red dwarf, which seemed even more insulting until I discovered that's a type of sun. This particular sun should be very familiar to Han Solo, who could reach it in twelve parsecs (that's how far away it is), but for the rest of us a parsec is a unit of distance: It would take several million years, even if we took an empty jug along instead of stopping for bathroom breaks. At 39 light years it's close, but that's in astronomical terms: It's like saying a government project is "only" a few million dollars.

For those of you who are Star Wars fans, I should add that this is a red sun we're talking about, named by the movie series' Admiral Ackbar: "It's a Trappist-1!" It's only a little star, slightly bigger than Jupiter and twelve times smaller than our own Sun. The truth is, red dwarfs are the most common types of stars in the galaxy, so in all ways it's unremarkable except one: We've discovered planets circling it.

Not only that, but most of the planets are around the size of our Earth. Not only that, but three of those planets are in the star's Goldilocks zone. And so, in the most stunning astronomical discovery ever, we can definitively announce that we've discovered planets inhabited by bears and little blonde girls. The worlds are thriving, and covered by porridge, making them just right.

Or maybe that's just a term astronomers use for a planet that's the perfect distance from its sun for life to exist: Not too hot, not too cold. Liquid water could exist there, which means you could, indeed, make porridge, although I prefer oatmeal. It's sweeter. At least, it is when I'm done with it.

Since Trappist-1 is so small it's very dim, like a 15 watt bulb, or a politician. (I never get tired of that ... even when everyone else does.) So to be in the Goldilocks zone, three of the planets whirl around very close to the sun, and to each other. The years are very short, the sun dim and red, and you could stand on one planet and see the others as plainly as we see our Moon. As a result there are probably a lot of tidal forces there, so you'd have no problem keeping your clothes clean. Really, it's like a paradise, except for the violent earthquakes and volcanoes that would come from the tidal forces, and I just realized they aren't talking about laundry detergent.

We don't know a lot about these planets, yet. What kind of atmosphere do they have? Is it like Montana, or Beijing? Is there water there? Considering how much water we've discovered across our own solar system, it's likely. And the best part is there are no gas giants, leading us to believe the entire system is devoid of both lawyers and Congressmen. (What? It's still funny.)

But regardless of that, this is still the largest number of planets we've yet seen around an exoplanet, which is to say a planet not circling our own Sun. It's like they're an outtie and we're an innie. And all of them close enough to Earth-size to make us sit up and consider the possibilities.

So, is there life? Bacteria? An ape civilization? Starbucks? Most important of all, do they have chocolate?

Or ... dare I say it ... something better than chocolate? Granted, seems unlikely.

Maybe we could send Han Solo to check. 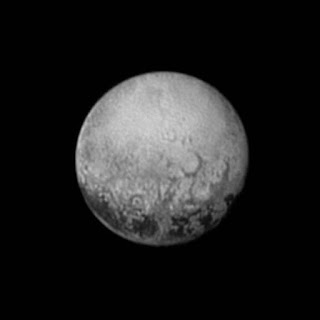