Emily and I just caught the most recent episode of "Gotham". The characters are great, but the show's really all about the villains--and the casting director, who should get some kind of special award. Cameron Monaghan, the guy playing the "Joker" (it's never been acknowledged that his character actually is the Joker from the comics) is the latest of a long list of revelations--I'd go so far as to say he's in my top five list of Jokers. If he is Joker.

When the show started, I wondered what they would do if it became successful. I mean, Bruce Wayne was what, twelve or thirteen? How would they bridge the gap between Gotham's past and the present day, when this naive little kid becomes Batman? How do they explain all these villains showing up so early in the timeline? How does Alfred survive getting a concussion in every single friggin' episode? (By the way, The Doctor's son is one of my favorite Alfreds.)

Well, I still don't know about any of that, but I can tell you this about the most recent episode: We saw the foundation of Batman going up. Or, you know, the seed germinating, or the origin origining, or whatever. We actually got chills. (Emily and me, not Bruce.) The kid (David Mazouz), who was one of my biggest concerns on the acting front, has taken the part and run with it, and in that last episode you could see that moment he determined to become something more.

I know some people have a problem with "Gotham" seeming to be out of the timeline, playing with origins and such, to which I say: Who's played with origins more than DC, to begin with? Just sit back and enjoy an awesome ride (Or, you know, switch to "Agents of Shield"). 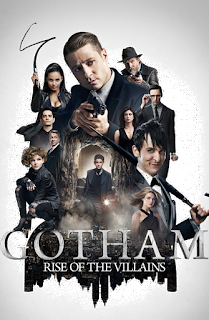