Winter almost beat the Hunter family Christmas celebration. Almost. But in the end we celebrated, if only a month or so late.

First there was illness. Then work schedules. Then more illness. Then weather. Illness. A tonsillectomy. (I realize that fits under illness, but still.) Then work schedules again. Okay, a lot of illness: flu, bronchitis, tonsillitis, a stomach bug, friggin' scarlet fever. Seriously? I thought the last person who caught scarlet fever was Charles Darwin. Luckily he survived, what with him being the fittest and all.

Some of this was with my oldest daughter's family: Two eight-year-olds collect germs the way I collected publisher rejection slips. I think my youngest daughter only got sick once during that period; my wife and I collected five illnesses between the two of us, trading them back and forth like Pokemon cards.

But finally our schedule was cleared, our lungs cleared, and the roads cleared: We would meet at my oldest daughter's house to celebrate Christmas on Sunday, January 29th. Enough time had passed that one of my grandkids asked if we were celebrating last Christmas, or next Christmas. But at least the unusual warm weather made the trip seem like smooth sailing.

I walked out that day to load presents in the car, and discovered we'd been rewarded with a white Christmas.

Well, it didn't seem too bad, not really. I mean, not for northern Indiana in January. I even shot a fun video of it, then went inside to get another load. When I walked outside again, a blizzard had hit. I've taken to calling it the Blizzard of Ours, because it seemed to be times for right when we were about to drive twelve miles.

It was a snow squall, really--it didn't last long. After that it was just heavy snow, compared to zero visibility and seeing (or rather hearing) houses blow by. At least, I think it was a house. I haven't checked to see if the neighbor's garage is still there.

But you know what? We were having by-gosh Christmas, and no more delays! The happy ending is that we made the drive safely, successfully dodging the guy who did not successfully make his turn in front of us. We all emerged unscathed, and I got new fur-lined house slippers, which every successful and unsuccessful writer should own.

And the best part is, we also made it home safely, leaving my daughter and son-in-law to deal with the present we got the twins: a home kit to make your very own volcano. 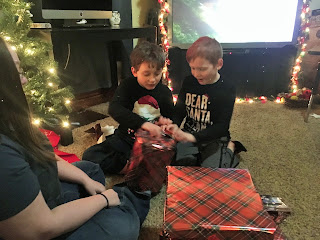 I was actually speaking while filming this. The audio makes it sound like I was moaning, which come to think of it I was doing internally.