In all the fuss that this winter has been so far, I haven't mentioned the fact that December 13th was the 25th anniversary of my employment at the Noble County Sheriff Department.

I started out as a jail officer, and after a few years moved to dispatch: first on second shift, then on a swing, and finally to thirds, where I've worked ever since. In fact, I've worked there for so long that in a few years I'm qualified to retire at full pension; although that's not going to happen until I'm selling enough books to pay the difference (and insurance). In fact, I've actually done this job for longer than anything else in my life, except parenting, firefighting, and breathing.

They gave me a really nice certificate, which will go on my office wall: 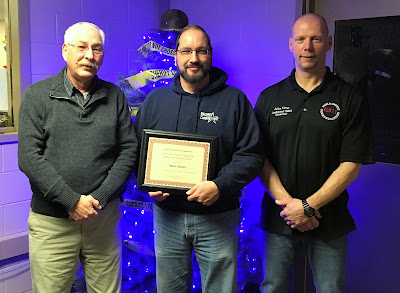 That's me in the middle. All three of us in the photo are volunteer firefighters in addition to being members of Noble County Communications. On the right is my direct supervisor, John Urso. If we had a ladder truck he'd be a truckie: tall and hard headed. He's so tough, Chuck Norris goes across the street to avoid him. His glare has made dispatch trainees literally melt. And guess who has to clean it up? Yep: me. Third shift vacuums.

On the left is Mitch Fiandt, who's been there so long his employee number starts with a minus. When Mitch started dispatching, he had to alert the police by ringing the nearest church bell. He'd call out the fire department by starting a signal fire, which if you think about it is pretty ironic. On the fire department his area of expertise is apparatus operation, but he's had trouble getting used to those newfangled internal combustion engines.

I know what you're thinking: "Mark, can you make fun of age after hitting the big two five?" Well, at my age it's all I can do. All I can say is that when I started out, we didn't have computers in dispatch or in fire trucks. Now I've got a computer in my pocket, and it even makes phone calls.

Other people have on occasion suggested I write a book about my experiences in the emergency communications.

Not while I'm still employed.