Fans of L. Frank Baum’s Oz books often have mixed reactions to new Oz related projects. We want them to be faithful to the books, at a time when many people think Oz started four decades later with the MGM Judy Garland movie. On the other hand, we’re often happy to have any kind of Ozzie entertainment, even when we’re up in arms about how very un-Oz it can be.
So when Wicked comes along, or Oz: The Great and Powerful, or when the characters pop up on “Once Upon a Time” or “Supernatural”, we hold our breath and hope the creators get it right. Usually they don’t. (Dorothy is blonde, darn it!)

If they don’t get it right in our minds, the next question is to they get it right in spirit? (After all, Dorothy wasn’t blonde in the first Oz book.) And failing that, did they at least give us an entertaining project that keeps Oz in people’s minds?
Along comes “Emerald City”. The first thing I heard about the project was that it would be a “darker, edgier” look at Oz, at which point I began screaming and tearing my hair out, and believe me, I don’t have hair to waste. 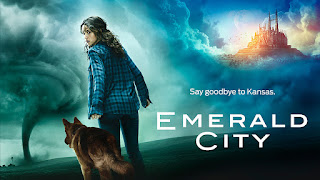 But having said that, Baum himself often made Oz a dark place. In the first book Dorothy and the gang kill two witches, two forest beasts that are intent on eating them, and the Scarecrow even murders a murder of crows. In the second book an army invades the Emerald City and takes over, and in the third a princess decides to have Dorothy’s head cut off—to add to her collection. Come to think of it, in the fourth (spoiler alert!) the Wizard burns down an entire country, and cuts another guy in half, with a sword! Okay, the other guy was literally a vegetable, but still.
So yeah, maybe not such a leap. “Emerald City” was a pleasant surprise, although that might be partially because I went in with low expectations.
There were plenty of shout-outs for the book fans, starting right from the beginning when one of the most important non-Dorothy characters show up—sort of. (Spoilers!) Still, when they said “darker”, they weren’t kidding around.
Dorothy starts out in Kansas with her aunt and uncle as in the book, but she’s grown up and working in a hospital—and stealing drugs for her ailing Uncle Henry. But in this version her mother is alive and has returned, living nearby but out of contact with her daughter. When they finally meet again it’s in the midst of both a tornado and a murder; Dorothy dives into a police car for safety from both and finds herself—and the officer’s K-9—lifted through some kind of space warp into a snowy wasteland where she promptly runs someone down. Come on—you know who that someone is.
Things just go downhill from there, as Dorothy immediately finds herself in the middle of political intrigue and danger from all sides. At least the dog (In Oz dogs are called “Toto”) likes her, as does the brainless straw-covered Christ-figure she saves from crucifixion. Yeah, you heard that right—he’s even got a wound in his side.
Sure enough, Dorothy is on her way down the Yellow Brick Road, although in Mountainous terrain full of death and destruction and people wanting to kill her. Meanwhile the Wizard has taken control of Oz despite the hatred of the only two witches left, there’s a frozen giant poised to destroy the witches’ temple, Dorothy may have signed a death warrant for the little boy she “rescued”, and it’s all very steampunk. It was about as far from the Oz books as you could get, and yet, in a strange way, not.
I mean, steampunk? Baum had an entire city that mechanically sank beneath a lake for defense, and a mechanical man who literally had to be wound up to work.
Overall, I liked it way more than I thought I would. The writers kept the pace moving, the actors did great, and there was plenty of mystery and intrigue to go around. Although the look was nothing like the Oz I’d imagine, the Spanish scenery was certainly spectacular, as were the effects. Not a big fan of that much darkness, though: I have a feeling we’ll see little or no of Baum’s humor in this version.
There were also hints that there are more secrets behind Dorothy than even she knows, and I assume that’s going to come around again. I like that she was more like the book Dorothy: not only caring but imaginative, determined, and not willing to take crap.
Still not blonde. But I liked the actress too much to care. 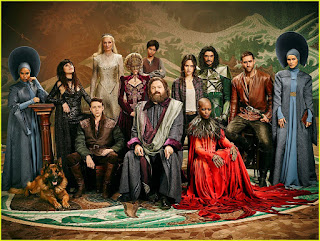