Asking a novelist to write short is like asking a politician to spend less money; asking the Wicked Witch to be less cackle, um, cackle-y; asking me to skip dessert. My novel manuscripts tend to be short, but that doesn't make me freak out any less when I have to reduce it to a 1,000 word synopsis. My latest manuscript is 82,000 words: It's like taking a full size pickup truck and reducing it to Matchbox size with your bare hands.

Now imagine someone trying to write a synopsis for one of George R.R. Martin's Song of Ice and Fire books, which are so big they're registered as lethal weapons. Seriously, even putting it on your Kindle adds two pounds. When I tried to read the newest one on the couch, I broke my hip. And the couch. Of course, no one would ask him to write a synopsis. In fact, he probably has an assistant that does nothing but write synopses ... seses ....

In theory the best way to write a synopsis is to write one paragraph for each chapter, then trim where necessary, as if it isn't going to be necessary. I tried other tactics. For instance, removing every "the"; putting into the synopsis only the third and fifteenth word of every page; and hiring George R.R. Martin's synopsis writer. None worked. (You wouldn't believe what that guy charges.)

So I looked the manuscript over again. While Martin's books are high fantasy, my newest story is apparently low fantasy, and yes, I'm aware of the possible jokes. That means it's set in our real world, but magical elements intrude into it; the best known example would probably by the Harry Potter series.


My story, The Source Emerald, is about a young FBI agent on her first assignment, who tries to track down possible gem smugglers in upstate New York. Magic ... intrudes.

All I had to do is boil down her personality, the plot, the stakes, and the major supporting characters into 800-1000 words, or less than two pages. Or shorter, depending on who you ask. Oh, and in your own unique voice ... with plot twists ... and the ending ... I'm going to go lay down, now.

Okay, I'm back. Almost all authors hate writing a synopsis, and those who like it almost always turn out to be heavily addicted to something and/or certifiably insane. I don't have the exact statistics on that. All I know is that on my first whack at it, I spent half a page describing why my main character, Lilly, absolutely doesn't believe the little girl she encounters is Dorothy Gale, made famous in the Oz books. I had to reduce that to, like, four words.

In the final version the whole thing boiled down to: "Lilly doubts Dorothy's story."

It took me three days to come up with that sentence.

In reality I got the whole synopsis done in "just" a few days, not counting my nightmares of being chased by an editor with a sharp red pen. My first version was about 3,500 words, which really wasn't too shabby. My second was around 1,500--I was slashing words like a horror movie villain.

And then--finally--920 beautiful, short, on-point words. That's it. If you want a shorter synopsis from me, I'll just cut from the bottom and you'll never know the ending, pal! (Or lady, since most of the agents and editors I've queried have been female.)

But I did it. I'm relieved, and proud, and surprised, but mostly relieved.

Now I have to write a query letter.

Hm ... or maybe I should tackle a short story. What do you think?

As a firefighter, I studied building construction a lot. Sadly, this gave me no skills in actually building a structure, although I can tell you why a lot of them fall down.
So when they started building the new Noble County annex in downtown Albion (which is right beside uptown Albion), I took double interest, since it was to be my new workplace. That's why I started stopping by periodically to take photos of the construction process, which I'm now sharing even though I'm pretty sure no one asked. (You can click on the images to expand them, which would be handy with real buildings, too.) 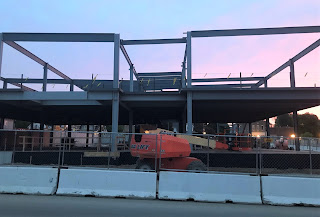 First is the skeleton of the building, more than a year before it was done. As you can see, the rib bones are connected to the hip bones. 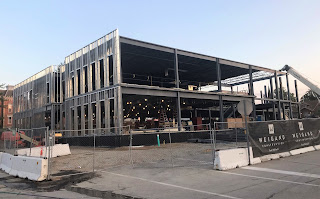 The corner facing the camera is where our new dispatch would be, on the top floor. If they had run out of money right there, we would be dispatching al fresco, which means in the open air, which would play hell on our electronics. It wouldn't do me much good either. I believe you used to be able to buy cans of fresco at the grocery store. (Wait, do they still make Fresca?) 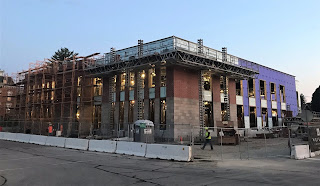 Faced with threats of indecent exposure, workers finally put some brick meat on the bones. 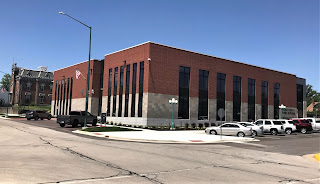 The final product looks way better than I thought it would, although it can't beat the old jail you can see here, just past it. There aren't a lot of bells and whistles, but there are doors and light switches, and that's something. 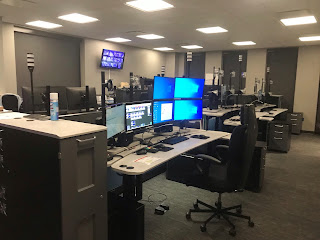 And here is my workplace, which doesn't seem to be making me sick like the old one. (I'm talking literally--allergies.) The job remains the same, but we don't blow a breaker whenever we use the microwave ... and that's also something. 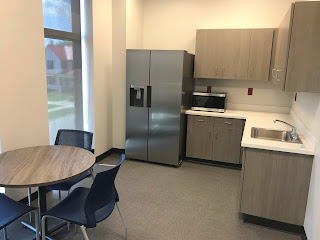 We have our own kitchen! Which may not seem like much, but when you work 12 hour shifts it's nice to have a sink to wash your dishes in. Overall I can't complain, although I probably will anyway. I'll probably stay on until I hit the bestseller list, or get taken out on a stretcher.